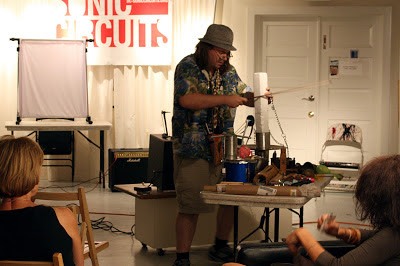 Jim Storch (also known as BurnOut warCry) has been a prolific improviser in Pittsburgh for almost a decade. Each one of his performances is a mini-spectacle, with Jim unloading his huge suitcase filled with toys, household objects, small instruments, and various miscellany onto whatever card table or surface is available and proceeding to sing, chant, bang, and just generally play with whatever seems to pass his fancy in the moment. In recent years Jim has taken up painting, producing delicate abstract canvases often influenced by Japanese calligraphy which seem as spontaneous and playful as his music. Jim will be improvising as part of Crucible Sound #3 on July 11th at Modernformations. This interview was conducted over email by RJ Myato.

Could you give us a brief history of the BurnOut warCry name? About when did you discover freely improvised music, and how long did it take you to start playing on your own?

I've been into jazz since high school and had been collecting little noisemakers for almost as long. I picked up an interest in free jazz (Sun Ra, John Coltrane, Cecil Taylor, etc.) during college through involvement with WRCT. I attended Pitt, but they would take outside students dring the summer. Playing music was not something I pursued at that time, though. The turning point came years later when I met Matt Wellins. I had played a few jam sessions with coworkers, but it was Matt who convinced me that what I was doing was worth pursuing a little more seriously. We started jamming regularly, and I played with his band Network of Stoppages a few times. Finally, in 2006, I finally got up the nerve to record a demo and try to get some solo gigs.

The Burnout Warcry name was swiped from the Spin Alternative Music Guide. The entry about Black Sabbath talked about how punks got into them "once they started hearing it as music and not as a slothful burnout warcry". I just thought that would make a good band name.

What is the connection between your painting and your music, if any? Is there an overall aesthetic you see going on between them?

Before I start to play, I have to decide how to begin. Although there are certain things that tend to happen during a set, the episodes and their sequence grow spontaneously from that starting point. The pictures I make also have elements of planning and spontenaity, although the ratios differ depending on whether I'm making an abstract or a figurative picture. I guess it's not much of a coincidence that I'm making more representational work since beginning to study non-improvised music more thoroughly.

Has your participation in the Renaissance City Choirs affected your improvised performances at all?

Yes. It has made me a better musician and, thus, a better improviser. Being involved with a GLBT & Allies choir has helped free up my voice, both the sense of being an out gay man and in terms of actually using my voice during improvised performance.

How much do "accidents" play into your improvisational practice? It seems to me that you often play the sheer size of your kit against the table or other surface on which you set up, encouraging things to fall. Is this a situation you tend to foster?

Most of the time I don't consciously choose to knock stuff off of the table, although that does happen. Sometimes it happens by accident and I work it into the performance, and sometimes I just ignore it. It really depends on how it fits into the performance at that moment. I don't really plan on stuff falling off of the table; it's more an inevitable byproduct of my set-up. There are theatrical and ritual elements to what I do, but they rise spontaneously from how the entire situation (including the audience's reactions) proceeds.