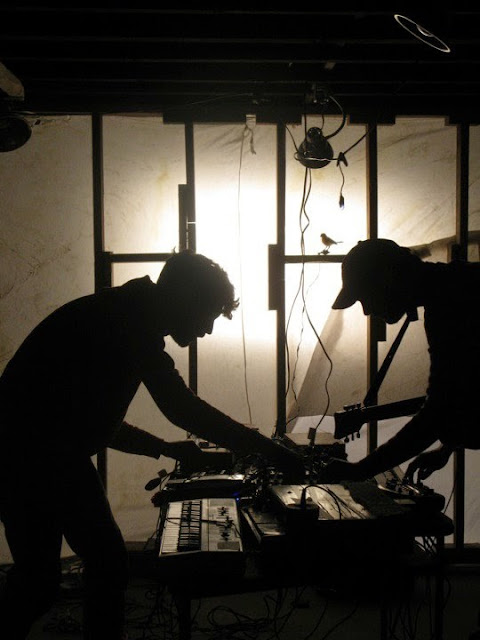 Joe Mruk is a visual artist originally from Plum Boro, Pennsylvania. His incredibly detailed illustration work can currently be seen on event fliers throughout Pittsburgh, as well as on a recent LP by the modern composition and improvisation collective Host Skull. Joe has also been a longtime member of the "Americana noise" duo Coyotes By the Way with fellow artist and California University of Pennsylvania graduate Seth LeDonne. He has also made music as a solo artist under a variety of monikers, most recently The Dead Refrain. Joe will be improvising as part of Crucible Sound #3 on July 11th at Modernformations. This interview was conducted over email by RJ Myato.

How does improvisation work in Coyotes By the Way and how has it changed over time?

When Coyotes started out, we "made" songs. Or planned them, at least. We had parts. Seth was getting good at circuit-bending (something I could never fathom attempting) and he had all these little instruments. He had a sparkly-sounding one and that was the star box. Thus we had the "star part." Which would be part of a song. Seth was originally doing percussion, and I was on guitar, but the formula was too rigid and playing live we were prone to making mistakes because, well, I had picked up the guitar only months prior and Seth likewise had had no former experience playing anything. But it was fun to do something in front of people. Our ideas were fucking weird. We wanted a banner behind us emblazoned with "Kindness, Manners, & Friendship." I still want that banner. Anyway, we loosened up because we had to. We realized that structures weren't fun and improvisation was. We quickly ditched the "songs" and began to record in a huge art studio. We incorporated our surroundings into the music (Seth realized how fun it was to mess with amp coils and I would jump on chairs as percussion). That studio prepared us for a lot of future shows!

How does improvisation fit into your artistic practice? Obviously your visual art is meticulously planned out and so on; do you see playing noise or improvised music as a break or catharsis compared to your painting, or do they tie together somehow? Is there an overall aesthetic connection you see between your music (in general) and your artwork?

My artwork has always been so rigid, Coyotes was always the catharsis I needed. Seth used to play the Silver Jews a lot, and that was a big inspiration for the both of us. It said "you don't have to be technically skilled to be completely interesting." Most people don't get the chance to realize this and that sucks. But when I make artwork I'm not really thinking about breaking out of the rigidness of past work; I'm more concerned with consistency. With a cohesive body of work you can develop your own distinctive visual vocabulary. I learned that from Seth. As for the connection between music and art, I wanna evoke atmosphere. I love artists like Labradford and Bark Psychosis, who are in love with the desert and the sound of nothing at all. I wanna be the Ennio Morricone to Seth's electronic eclecticism.

A lot of your visual art work deals with natural imagery, especially a lot of the more violent or tragic elements of nature. Do you think ideas of nature or the natural world inform your music in any way? Do you see the spontaneity of improvisation as somehow "natural"?

Sure! If Seth and I are creating a sonic landscape, it should constantly be evolving, seamlessly. People can tell, even at noise shows, when you've made a mistake. Part of the challenge is to create a seamlessness. That's why we're constantly going to the mixer. Our rule of thumb has been the slow fade. There's a lot of communication we do with our eyes. Seth knows when to intensify or bring it down. His job is tougher than mine, because he's the one who has to create and control texture. It's all very instinctual. I love playing shows because I never know where it will go. Right now my choices are "open tuning or standard?" That's about it —I don't think about structure. We do not practice. That would be like drawing a map.