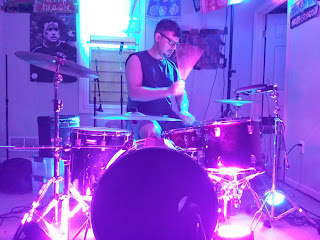 You may already know Matt Rappa as the drum half of the long-running self-described "A.D.D. bludgeon rock" band Triangle and Rhino. More recently, he's been experimenting on his own as Skeletonized, which has mutated into a full live band. Whatever the context, Matt's playing seems to be always recognizably heavy and packed with detail and nuance. He'll be improvising with Madeleine Campbell, Ricardo Iamuuri Robinson, and Jeff Weston as part of Crucible Sound #21 on Saturday, November 5th at Wood Street Galleries.

Can you give me a little history of the various musical projects that you've been involved in?

I grew up in Meadville, Pennsylvania and started playing music with my best friends in a punk band called Fogo Junior. I started playing drums on buckets in my friend's basement, and eventually got a used Rogers drum kit and "taught" myself how to play by listening to records and trying to replicate what I heard. I was lucky enough to come up in a thriving small town DIY scene in the 90's. We had a good variety of bands and styles come through on tour, which exposed me to a variety of different underground music from all over the country.

Before I moved to Pittsburgh, I was in a band called The M.O.T.L., which was my first experience playing improvised music with a variety of different people & instruments at shows. After moving to Pittsburgh in 1997, I enjoyed attending shows at Millvale Industrial Theater and eventually played shows there and wherever we could in a band called Warlocks. Warlocks was largely improvised as well, and included drums, bass, french horn & sometimes guitars or other instrumentation. We hosted house shows in the North Side, and were lucky enough to have Thrones play in our dining room, among other great noise acts and bands. The first tour that I went on with a band was with Warlocks in 1999 or 2000, driving around in a packed station wagon from show to show. The highlight of being in Warlocks was opening for Men's Recovery Project & Thrones in Cleveland, as well as opening for Enemymine(ex-Godhead Silo) for a leg of their tour.

After Warlocks ended, I was one half of sample/loop noise project Boda P'nodo with my friend Jake who I played with in Fogo Junior & Warlocks. Boda P'nodo made sounds with a 202 sampler & Halloween voice changer from what I recall. In our short existence, we were lucky enough to play shows with Reynols, Evolution Control Committee, and Burning Star Core.

After Boda P'nodo, Jake & I started writing songs on guitar and drums as Triangle & Rhino. We went on a month long U.S. tour without ever having played a show in Pittsburgh. We had various third members through the years contributing vocals, horns, electronics, or guitar sounds to the band, but the core duo always remained. Throughout our 13 (maybe 14?) years as a live band, T&R played countless live shows, went on various tours, released music on cd, cdr, cassette, vinyl and digital formats, and played shows with countless amazing local, national & international acts. Jake now lives out of state so Triangle & Rhino exists solely as a recording project as of 2015.


More recently, I played for a couple years in a punk-ish, heavy, weird band called Fantasy Crime, and started Skeletonized as a recording project. Skeletonized existed as a recording project for a few years, mainly as an opportunity to improve on my recording and mixing skills. My friend Eric helped considerably with information and techniques to improve my recordings, and then helped me get started on translating Skeletonized to a live solo project. After playing some shows solo, my friend Luke joined on saxophone and we started writing and practicing as a duo with me on drums, vocals & electronics, and Luke on sax. Most recently, my friends Eric, Brian & Eric have joined in live on saxophone, electronics and guitar. We're currently recording and mixing songs for what I hope to be a digital release, as well as a release on cassette.

Is it fair to say that, over the years, you've gravitated toward making music that is more tightly composed? Are there still elements of free improvisation that figure into recent Skeletonized material?

All of my parts in the Skeletonized live set are "written", or practiced and played essentially the same way each time. The other instrumentation (saxes, electronics, guitar) is partially improvised and partially written/practiced. I have & am currently taking improvised Skeletonized recordings and attempting to make arranged pieces from them. At this point, it's one of the best ways to generate ideas for songs.

Do you draw a distinction between "jamming" (for lack of a better term) to generate ideas that will eventually be solidified into songs versus free improvisation for its own sake?

I'd say I do draw a distinction between the two. A lot of times, a passage of a recorded improvisation will fall in to place for a few minutes and stand out to me and/or whoever else is involved and listening to the session. That passage would end up on a physical or digital release after all the performers agreed that it sounded great. Sometimes the bi product of that passage is inspiration for a piece with structured parts that's performed the same way or essentially the same way each time.
I think recording those improvised moments/sessions was always important to me & whoever else was involved at the time. When everyone hits a sweet spot in the recording session, it's great to be able to go back and listen any time you want.

At the same time, there is something magical about improvising live in front of an audience. Everyone performing and observing can potentially share a moment in time that can't be replicated, even if the audio or video are recorded live. That's why I'm so excited about participating in Crucible Sound with other performers I've never met before. Anything good or bad can happen, and that unpredictability is exciting.


Check out Skeletonized on Bandcamp.
Posted by anthony at 8:40 PM