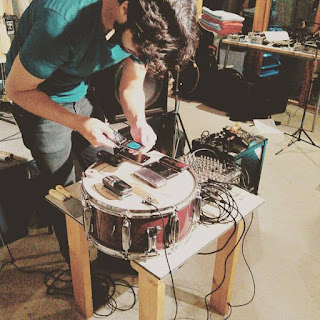 "Daniel Malinsky is an improviser and composer from Pittsburgh in the United States. His work is improvised electro-acoustic music, with varying instrumentation but in recent years his ultra-minimal performances have been comprised of audio feedback, electro-magnetic interference (from mobile telephones or other electronic devices), and amplified object manipulation" (blurb swiped from Cafe Oto). He'll be improvising with Matt Aelmore, Stephen Boyle, and Eric Weidenhof as part of Crucible Sound #20 on Saturday, October 1st at Wood Street Galleries.

You've been very busy since your last appearance at Crucible Sound almost 2 years ago. Can you tell us about your Japanese and European tours?

I had a very nice time performing in Japan and exploring that beautiful country (it was my first time there). I played in Fukuoka, Kobe, Osaka, Kyoto, Yokohama, and Tokyo, collaborating with folks like Masafumi Ezaki, Yuma Takeshita, Yuji Ishihara, Tetuzi Akiyama, and Toshimaru Nakamura. All of these people are innovative and amazing artists, and it was really a privilege to work with them. It was especially interesting since there was with some people somewhat of a language barrier (I don't speak Japanese, unfortunately) and so in a few cases the bulk of our communication occurred while playing. Toshi Nakamaru has been an inspiration to me ever since I was just getting into electroacoustic improvised music, and playing with him was a special honor — I was very nervous. He was also instrumental in organizing the tour and I am really thankful for that. Everybody I met there was also really nice and friendly, I had a lot of fun. It was nice to see a bunch of great performances on nights I was or wasn't playing. I saw some creative stuff that spanned the gamut of noise, improvised music, electroacoustic improv, jazz, weirdo rock, and folk, plus mixtures of these things and styles hard to classify. Some of the performances which most surprised me and made me uncomfortable (in a good way) were ones that combined folk or pop or "straight ahead" jazz with electroacoustic music in ways I had never seen in the USA. It was obvious that Japanese musicians are continuing to push the boundaries of innovative art. On top of all this, I managed to visit places (venues, record labels/stores, etc) that I had only read about but which played an important role in the history of Japanese experimental music, so that was really cool for me.

In Europe I played a handful of shows -- in London, Prague, Berlin, and Munich -- in between attending some conferences and visiting friends, so it was a low-key and spread out kind of "tour." All the shows were good experiences (though I blew out my mixer in London -- forgot about the voltage difference on the power grid!). I had an especially nice time in Prague, which is a beautiful city where I saw a nice mix of experimental music and film/media art. In addition to playing a solo set there, I collaborated with Laura Luna and Michal Kindernay which was a really good experience. In Munich the show was great, but I also had a nice time playing baseball with some new friends, in the park where Oktoberfest happens. I felt a bit of pressure because I was coming from a country where baseball is the national pastime and I am terrible at sports. Luckily, I managed to do ok.

Any examples of those performances which surprised you?

I can't think of the group names right now, but for example I saw Yuma Takeshita perform with a band that was playing something akin to indie folk or folky indie rock (say, in the style of Galaxy 500 or something). Yuma plays "electro-bass" which is a self-made bass guitar with oscillators and various noise-making electronics built into the body. So, on top of reverberant guitar strumming there were electronic clicks, sine waves, low frequency oscillations, etc. Those strange sounds were not superfluous, and they did not come off as gimmicky or weird for-the-sake-of-weird. They combined with the other sounds to make for a strange and creative kind of harmony.

Can you describe the music you were performing on these tours?
The materials I perform with vary, but on both of these tours I was amplifying the electromagnetic interference of mobile phones with a guitar pickup. I have a small collection of old (donated) phones which are not connected to service, but they keep searching for signal and thus interfere with the magnet in the pickup, which is transformed into audible crackling and fuzz and clicking. I manipulate this signal a little bit, just with the EQ on my mixer. I also use the mixer to create feedback (in a "no-input mixing board" style), mostly quiet and high-pitched pure tones. In addition to this, in Japan I was amplifying the surface of a snare drum, and scratching/scraping/poking/rubbing it with various objects. In Europe I was mostly using a cymbal in place of the drum. But various components of this setup changed from show to show. Something nice about taking the cell phones on tour is that they behave quite differently in different places, I guess because the operating standards of cell towers and cellular network infrastructure differ country-to-country.

That's interesting, I hadn't considered the notion of site-specificity when it comes to physical phenomena like interference. Did this result in any unexpected moments or cause you to improvise in new ways?

Some of the sounds coming out of my phone setup were quite different than what I had come to expect based on recent performances in the US. (I seem to remember things being especially different in Germany.) This was nice, as it provided new material to work with, especially since I often prefer to let the phones and other electronic components do their thing for long stretches of time without intervening. When I don't know how my equipment will behave ahead of time, I get to focus on listening, rather than preoccupying myself with producing a certain outcome. I like to experiment in the moment, learn how the constructed "system" (of electronics, speakers, wires, space) behaves in the course of a performance. Then the structure of the resulting piece of music is a reflection of my learning process. This is why it is also nice to use borrowed equipment. Some years ago, when I was playing mostly with microphone feedback -- something very site-specific since feedback behaviors would depend strongly on the room, the condition of the equipment being used, the spacing between microphones and speakers which was never exactly replicated -- "learning" the behavior of a system and putting that on display as performance was very important to me. That has been less central in recent performances, but I'm happy to get back into it.

What you're saying about listening reminds me of a line from Michael Johnsen's bio: "His work is characterized by a relative lack of ideas per se, and an intense focus on observation, the way a shepherd watches sheep." This deemphasis of the artist's role as idea generator and embrace of an almost journalistic approach is compelling. I wonder how this plays out when you're collaborating with other musicians, though. How/does your approach to observation change when you've got multiple human actors involved?

That's a tough question, and my own views about it are far from settled. One of way of thinking about it just considers those other human actors as part of the "system" — they determine by their actions some major part of how the whole performance sounds just like features of my electronic components and instruments and performance space influence the sound of a solo piece. So, I try to listen carefully, to think more about what's going on around me and where the other players might be going than "what's my next move." I'll admit that I'm not always successful, this is something I'm working on.

In Japan I was traveling with a good friend who is not himself a big fan of this kind of improvised music, but he is an astute listener. He mentioned at some point after a concert that some improvised performances seemed to him to exude a kind of masculinity. When I asked him what he meant he said that some players came across as dominating — they kind of flex their musical muscles and determine for others where the music will go, what the presiding aesthetic will be like, maybe by being loud or persistent or uncompromising or by using certain kinds of sounds that compel other players to react instead of contribute as equals. (I'm paraphrasing here.) I think there is a lot of truth to this, and if we intend to have truly egalitarian improvising experiences we have to be vigilant. We like to think that improvising which is "free" (i.e., not structured by the forms and expectations of jazz and other genres) is non-hierarchical, but just as in politics dismantling hierarchies is not sufficient to ensure equality, so it is in improvised music. There are always power differentials and social dynamics; even when there is no prevailing order or structure explicitly elevating somebody and putting somebody else down, domination and marginalization can arise in subtle ways. So, I like to think about which practices (if any) can really ensure that all the people playing do contribute to the artistic product as equals.


More information about Daniel Malinsky's music is available at dmalinsky.info
Posted by anthony at 11:08 AM