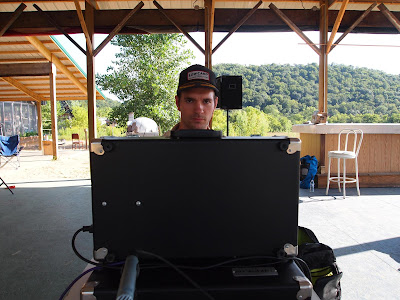 Aaron Zarzutzki describes himself as "an improviser of various sorts." From his home base in Chicago, he investigates "misuse and perversion of objects and systems...virtuosity, volatility, futility, and capability are thought of." He'll be visiting Pittsburgh to perform at Crucible Sound #16 on Thursday, June 11th at Modernformations.

The long-running Myopic Improvised/Experimental Music Series in Chicago is one of the inspirations for Crucible Sound here in Pittsburgh. Can you talk a little about the series and your involvement?

En route to Chicago from Florida 10 years ago, I played a gig in Atlanta and bassist Pat Lawrence mentioned the series to me. My first day living in Chicago was a Monday so I checked it out. Shortly after that, Fred Lonberg-Holm and Brian Labycz roped me in as a host. The series was founded over 20 years ago by Weasel Walter. The shows are aimed to be like a workshop for the musicians as they are encouraged to play in first time groupings often with others they might not normally play with. Percussionist Julian Kirshner is currently the other organizer. The series has hosted players ranging from Jim O'Rouke to some dirty dude off the street.

Can you talk about some of your recent collaborations?

I've got a new project with guitarist Jacob Kart that has been fun. Guitar and synthesizer duos with attention towards harmony. It feels great to actually play notes now and then.

Ben Bennett and I were booked to play in a quartet with Wilson Shook and Ryan Jewell back in 2009, but my trip to Seattle got bumped to a different month. Ben and I finally played in 2012 as a totally acoustic duo. Last year we played in a trio with Fred Lonberg-Holm which was one of my favorite sets I've ever played. Ben just stopped through Chicago and Fred wasn't around so we did a couple days of recording as a duo. I'm still trying to wrap my head around the material that resulted from the recording. Lots of overlapping timbres, but the main aspect of the music might be stochastic and gesture-free processes versus more gestural events. A lot of moments might sound like a field recording, but mutate into something that is definitely two people hacking away in a room while keeping the same timbral elements. Very excited to see where the duo is headed.

I don't really know how to discuss playing with Graham (Stephenson). I met him when I was a long-haired teenager at a Lescalleet show. It took us a long time to finally play together and now we do it often. Playing with Graham always feels very low-key and casual.

The Green Pasture Happiness was one of the greatest improv trios of all time and criminally under-documented. Danfan (Daniel Fandiño) lives in Jersey now and Brian (Labycz)'s efforts have shifted towards house and techno musics, so tGPH lies in a state of dormancy. We do have unreleased material with Guillermo Gregorio, Jim Baker, and Frank Rosaly which will hopefully surface someday before the reunion concerts.

Nick Hoffman is one of my favorite people on and off the court. When he was last living in Illinois, he was out in Schaumburg so we didn't get together regularly, but we still managed to do some weird weekend tours. Sometimes as a duo, but we did trios with Mattin and Takahiro Kawaguchi in Normal, Illinois of all places. The most recent things Nick and I have done together are rock music. His Pilgrim Talk imprint released my "best of the hightone years" tape and I played in drums in a disastrous tour for his black-metal-sans-distortion-and-screaming-meets-garage band Back Magic. Their last album "Chorus Line to Hell" is really something special.


How about your solo pursuits: what have you been focusing on lately?

A few years ago I had a computer failure that lost two solo projects. An acoustic and field recording based "softcore" for Ghost and Son and an all synthesizer based "relentless love" for Copy For Your Records. The last track off the latter was saved and now I'm about to make the rest of the record inspired by the lost one.

Can you talk about how you choose your weapons? I know historically you've invested a fair bit of time and energy into creating or modifying your own instruments and processes, like: no-output turntable, homemade electronics, and the setup you described to me recently that involved tattoo coils and mechanical feedback. For Crucible Sound, you're going to be playing synthesizer. Conceptually, what has pulled you down these different paths? Do you see them as separate modes, or as related threads?

I've been working with electronic instead of acoustic setups lately because people seemed too interested with the objects I was using instead of the sounds they were making. I don't really see my different instruments as being different paths. It all stems from the same curiosity. When I got my first guitar I had to mess with the tuning pegs and see what was under the pickguard. If I'm walking down the street and something catches my eye, I have to pick it up, flick it, shake it, see what sounds could come out of it. I don't really consciously develop these ways of playing, I just mess around all day and see what sticks.

Aaron's most recent release is "No Dice" with Graham Stephenson on Hideous Replica.
Posted by anthony at 10:53 AM