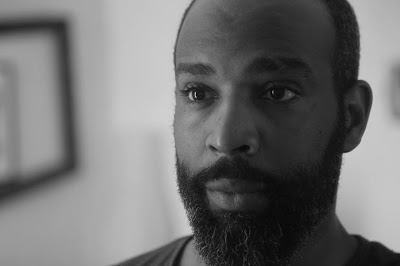 Lifelong Garfield resident Ricardo Iamuuri is a singer-songwriter, performance artist, and educator. He uses sparse guitar and vocals to escort the listener out of their comfort zone and confront our broken commercial culture. Recently he's been experimenting with incorporating digital tools and creating site-specific sound installations. You can hear him live at Crucible Sound #5 this Thursday, September 12th.


You like to describe your music with a long string of terms: "urban folk hop electro blues afro rock." All those genres, especially the blues, rely on structured improvisation. Is that something you think about as part of your songwriting process?

I kind of look at it from the perspective of an archaeologist. I feel that the song is already there, it just needs to be excavated. It's waiting to meet me, I'm waiting to meet it. I'm looking at the fretboard and the piano keys and all of these different songs came from the same instruments. It's kind of like shoveling out whatever that you can find there. And then I create this fantastic relationship where the music chooses me sometimes as I'm writing it, especially if it's something that I know is going to have some shock value, or be a little bit more like outsider music.

Lyrically, just being really selective about how I deliver or how I put words together. Sometimes that combination of words is just not going to be as powerful as this piece of the song wants it to be, so the song starts to speak to me like "are you going to sing me or what? Or are you just going to be lazy with me or what?"

How do you do the subtraction to get to the song?

One of the most difficult aspects of creating anything is telling yourself when do you stop, because the creative process is constantly unfolding. But sometimes you have to just say "this is the endpoint." And if not the endpoint, this is where it's most powerful. Everything else is kinda cool, but let's truncate that and focus on the meat of the song. Depending on the content of the music...if it's just instrumental, I just kind of surrender to it and allow it to drag me throughout the streets of the universe. With lyrics and words, words are very powerful, so I have to be very careful. It's all about representation. I don't want to misrepresent myself, but sometimes I do. Or I'm misconstrued.

I'm interested in what you think of what those genre names mean in 2013 with respect to this subtractive process. Some of your songs that I've heard are pretty stripped down; they're just guitar and vocals. Do you find yourself gravitating toward a more minimal aesthetic in general, or is it situational?

Minimalism is preferred. I like to create space that invites the listener in. And I like a sort of welcoming chords, chords that are not offensive. I do believe that sound has the power to offend the ear as well as massage the ear, and also invite the listener in. Being aware of that, I try to open up a space with the minimalism and then usually they're very innocent melodies, guitar-wise. Then the gravity comes with the lyrics. Come on in, let me tell you a story, or let me tell you what I'm thinking, and the weight is added on lyrically. At least, that was my first album, that was the agenda, because it was "nursery rhymes for the underfed mind." I wanted to create a sort of lullaby feel, but with the "underfed mind" thing and the "conversations with shepherds, sheep, guinea pigs, and monkeys," I wanted to add a lot of criticality to these various archetypes that I was using to express points of view on that album. It's very stripped-down, very direct, but now I want to add another element on, which would be the hop, and moreso the electro-blues, because the hop, the beatbox, was in the first album. But now it's evolved to a fuller sound but I want to be very careful that I don't make it too congested. If it's going to be congested then I want it to be purposefully congested and powerful.

What drew you to experiment with making sound collages?

I became interested in sound art and John Cage's work, just meeting the sound before the artist manipulates it and turns it into whatever we want the pitch/rhythm/syncopation to be. I really just started listening more, and it was a whole new sort of experience to say what is musical, even though that's me imposing my own musicality upon these sounds.

With music I try to moreso think of it in that way, piecing these chords together, or these sounds, or this lyric, the way that I pronounce this word or that word. It may sound orderly and it may not be a beautiful mess such as sound collages can be. It frees me to do whatever I want to do, where I don't have to create music.

One of the most serious jobs in our culture is being a comedian. But calling yourself a comedian in our culture, people come to see you with the expectation of you making them laugh. Calling yourself a musician, people come to hear what they expect music to sound like. With sound collage, it frees you from that, and it can still be music, and it can still deviate and explore all types of sounds.

Can you give me an preview of the installation?

It's a gun violence piece, it's called "Ringside Ring Out." I found 3 locations in the Garfield area where young black males were killed due to urban youth gun violence. And in these specific locations, I have created 3 sound essays or sound stories that all come from a different perspective of the guns, the victims, and the perpetrators. I'm trying to stay away from making them too statistical. I want them to be more emotional, and just really encouraging the listener to empathize with the space that they're physically standing in. We constantly walk upon the graves of yesterday's lives. To bring about this awareness that something tragic has happened here that has changed many people's lives. Something tragic that needs to come to an end, not just a band-aid, but it needs to stop. So the perspective I'm coming from is: if gun violence hasn't happened in the African American community in over 10 years, kind of a future projection, and we're listening to it as though it's some sort of museum installation out on the streets.

So there's this really strong current of social conscience running through your work. I've read some things you've said about overcoming imperialism and social hierarchy and the ways we interact. I wonder what you think about this idea of collective improvisation, of making music with people who you might not have even met before. How do you think of that as a social act? How do you think about putting yourself in that setting?

It's going to be very natural for me. It's just going to come down to what mood I'm in in that moment, to either have the conversation, and wherever the musical conversation is going to lead us. It's very social and beautiful moments can happen out of it, tension and friction can happen, misunderstanding… It's definitely going to be very interesting to see whether two strangers can create a sort of strange familiarity, where we'll meet, and where we'll allow it to breathe, allowing space for the other to speak, and doing a lot of listening. You have to be very interested in the other dreamer that you're in front of, you know? They have feelings. That's basically my philosophy. My name, Ricardo Iamuuri — I am you, you are I — it's seeing yourself in all things. That comes very very naturally for me. Depending on my mood, I may want to talk more, I may not want to talk more. We'll see what happens that night. That's the thing I have to watch: am I going to be honest with where I'm at, or am I going to entertain? Honest performance is an interesting thing to juggle.

Is there something unique about relating to people through music as opposed to just having a conversation? There are often a lot of utopian ideals projected onto the practice of collective improvisation. I wonder whether you see that as naive, or promising, or something else entirely?


I guess it depends on the artist. I think there's an agreement from the very beginning that nullifies what actually goes on with everyday strangers meeting each other. When there's an agreement that this is happening this day, it's improvisational. People are coming to the space with their idea of what it's supposed to be. In a way, it's more friendly and organized. It's improvisational, but it has borders. It's sort of predestined. With a random conversation where the same sort of energy exchange happens, it isn't chosen, unless we're all going to have a discussion together at a specific venue about a specific topic. Both exchanges have passion, agreement and disagreement, can have that sort of pull. And both of them can reflect the human condition, the sadness, the grief, the joy, the celebrations, the destruction, the dance of everything that's happened. It's all pretty much there in both situations. That's a long scenic way of saying that musical communication and conversation are essentially the same. I find hope in both.